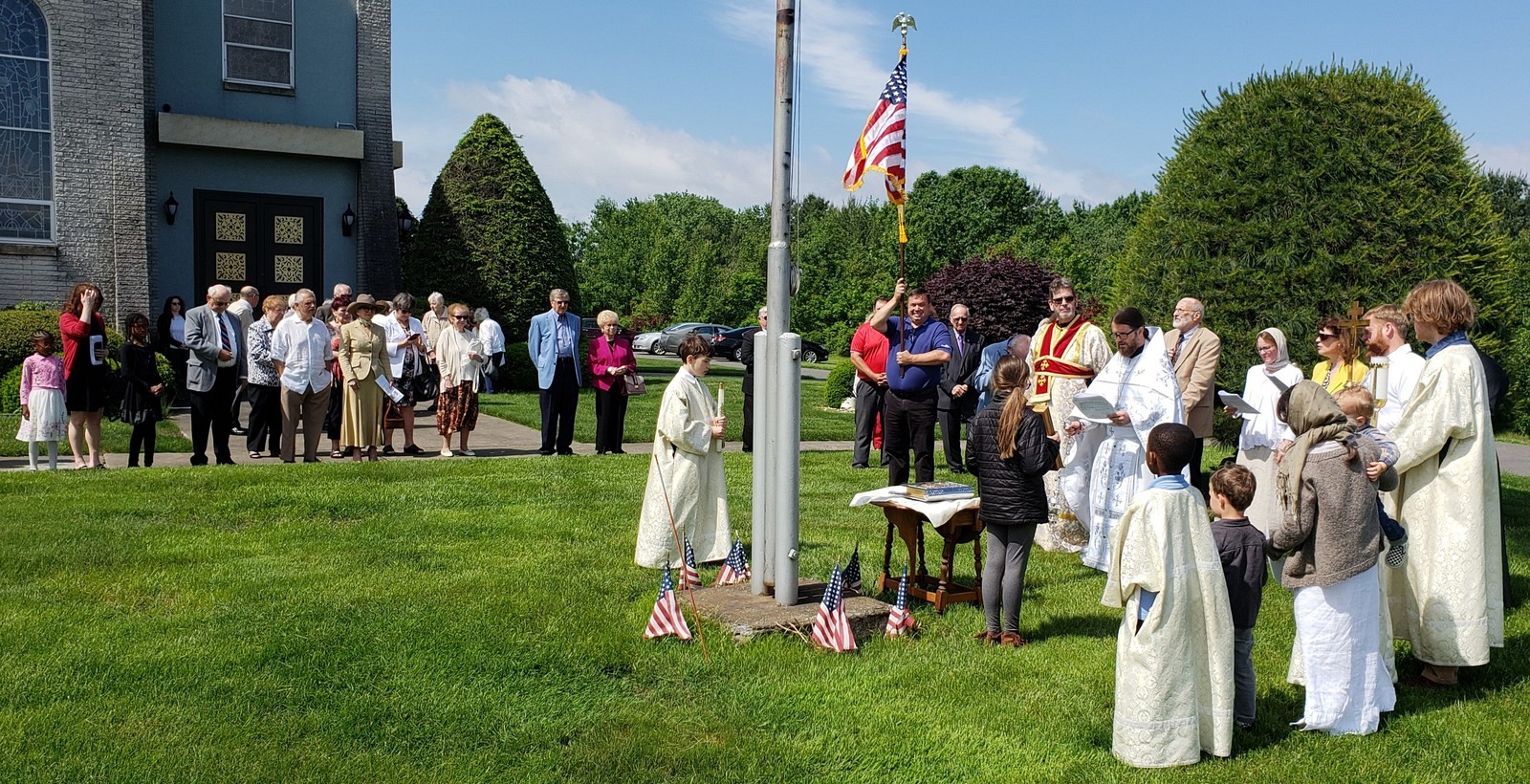 The History of Our Parish

Almost 50 years ago, a new church was consecrated and dedicated to the glory of God in Wilkes-Barre, PA.  After much prayer, sacrifice, and toil, the Holy Trinity Church became a reality.

A group of Orthodox Christians first met early in 1966 to discuss the founding of a new parish,  It was agreed that a new parish was badly needed in this area.  An organization known as the “Orthodox Christian Progressive Association” was formed, and it petitioned the Council of Bishops of the Metropolia to approve and bless the undertaking.  Having gained approval, the group elected officers, established a building fund and formed a land search committee.  In due time, the search committee made a recommendation that was adopted to purchase 10-1/2 acres of land on which the church now stands.  A charter was issued by the county court on October 27, 1966, to the “Holy Trinity Russian Orthodox Greek Catholic Church.”

The first Divine Liturgy of the newly-formed parish was celebrated at the Carpatho-Russian School Hall in Hudson, PA, on Mother’s Day, May 14, 1967. Later that month, the first parish council was formed and officers were elected. Michael Stchur was elected as the first senior warden. At the same time, a building committee was chosen and began to function.  Joseph P Peleak, a registered architect, was commissioned to design the new church and oversee its construction.

On Pentecost Sunday, June 14, 1967, groundbreaking and blessing ceremonies were held on the site of the new church.  A banquet was held to commemorate the occasion. The Very Rev George Pawlush assumed duties as the first resident pastor on July 1, 1967, and he immediately organized the church school for the religious education of the young people of the parish.

To ensure the success of their goal, many fundraising projects were undertaken by the parishioners.  The women of the parish met frequently and held quilt-making bees, where many beautiful handmade quilts were made and offered as prizes at parish bingoes.  They also made pizza, donuts, bread, and hoagies.  All profits were donated to the building fund.  A major portion of the building fund was derived from the making and sale of pierogies.  This continues to be a major source of income for the parish.  The men and women also sponsored numerous family dinners, bazaars, raffles, and picnics.

Excavation of the new church began in early February, 1968.  Work was completed in January, 1969.  In June, the parishioners witnessed the placing of the three onion-shaped cupolas on the church.  The total cost of the new edifice was $370,000, including furnishings.

The solemn consecration of Holy Trinity Church took place on September 20, 1969.  The Hierarchical procession began from the temporary rectory at 444 E Main St to the Church.  It included His Eminence Ireney, Archbishop of New York, Metropolitan of all America and Canada; His Grace Kiprian, Bishop of Philadelphia and Pennsylvania, Very Rev George Pawlush, Dean of the Wilkes-Barre Deanery and pastor of Holy Trinity, and the reverend clergy of the area, deacons, servers, and the choir.  Following the vesting of the Metropolitan, the consecration of the Holy Table was solemnized, with Holy Relics placed in it.  This was followed by the blessing of the Table of Oblation, the Iconostasis, and the entire interior of the Church.  A Hierarchical Divine Liturgy followed, celebrated by Metropolitan Iriney, Bishop Kiprian, Fr George, and visiting clergy.  The Holy Trinity choir, directed by Mrs. John (Agnes) Homick, sang the responses.  Peter Welgus served as reader.  At the conclusion of the Divine Liturgy, the exterior of the church was blessed.  A banquet was held at the Treadway Inn (now known as the Woodlands).  The main address was delivered by John Turkevich, Ph.D., son of the late Metropolitan Leonty, Primate of the Church from 1950 to 1965; he spoke on “The Future of Orthodoxy.”

In June 1978, the Holy Trinity parish honored Fr George on the twenty-fifth anniversary of his ordination to the Holy Priesthood.  Friends, community leaders, and parishioners paid tribute to Fr George.

Early in 1979, in anticipation of the tenth anniversary of the dedication, a decision was reached to have icons written for the sanctuary and on the ceiling of the nave.  Mr. Constantine Youssis, who had done earlier iconography for the iconostasis, was commissioned to write the icons.

In February of 1988, Fr George Pawlush announced his decision to retire.  Plans were made to hold a testimonial dinner honoring Fr George and Matushka Anne for their dedicated and unselfish service to the parish.  Friends and well-wishers offered congratulations and best wishes.  Parishioners expressed their love and gratitude for Fr George’s many years of sacrificial spiritual guidance.  Years of harmony and mutual respect were noted at this time.  Many Years!

On November 1, 1988, Fr John Mason, after appointment by Bishop Herman, arrived from Yonkers, NY and celebrated his first Divine Liturgy at Holy Trinity on November 6.

On Sunday, November 12, 1995, Holy Trinity Orthodox Church, Wilkes-Barre, Pennsylvania was blessed with the good fortune of Father David’s arrival as our pastor. He served his first Divine Liturgy on that day.

Archpriest David has devoted his life as a priest continuing to serve as pastor while serving in the Church in many other capacities. He served as a Senior Lecturer in Pastoral Theology at Saint Tikhon’s Seminary, South Canaan, Pennsylvania. Father David taught at Saint Tikhon’s Seminary from 1989 to 2018. In addition to his Pastoral Theology courses, he lead an integrative seminar in Field Education with Father John Kowalczyk. Together they also worked to compile the Seminary’s Handbook of Field Education. Fr. David retired from Holy Trinity Parish in February, 2018.

Nine months after the retirement of our beloved Fr. David Shewzyk, Holy Trinity Orthodox Church welcomed our new rector and his family into our community. Fr Innocent Neal, Matuska Melanie, Ephraim (7), Andrew (4) and Sebastian (2) were formally assigned to Holy Trinity on October 1st, 2018 by His Eminence Archbishop Mark. Fr. Innocent and his family are familiar faces in NEPA as they were previously at St. Tikhon’s Monastery where Fr. Innocent was the Bookstore and Press Manager. During that time he was also the rector of Sts. Peter and Paul Orthodox Church in Union Dale, PA. Fr. Innocent is a 2005 graduate of St. Tikhon’s Seminary where he received his Masters of Divinity. After graduation he moved to Atlanta GA to serve as a Reader, Catechist and Assistant Administrator at his home parish, St. John the Wonderworker. During that time he met his wife Melanie, and had their first son Ephraim before returning to St. Tikhon’s in 2014. The Neal family is excited to be in Wilkes-Barre and a part of the Holy Trinity Community. “We immediately felt at home here at Holy Trinity and are excited about the future of our community.”, said Fr. Innocent. “We look forward to getting to know and spend time with everyone in the parish!”

Be Our Guest!
Discover the rich and ancient beauty of the Orthodox Faith. Learn more about
What to Expect OR View our Service Schedule.

A little before midnight on the Blessed Sabbath the Nocturne service is chanted. The celebrant goes to the tomb and removes the winding-sheet. He carries it through the royal doors and places it on the altar table where it remains for forty days until the day of Ascension.

At midnight the Easter procession begins. The people leave the church building singing:

The angels in heaven, O Christ our Savior, sing of Thy resurrection. Make us on earth also worthy to hymn Thee with a pure heart.

The procession circles the church building and returns to the closed doors of the front of the church. This procession of the Christians on Easter night recalls the original baptismal procession from the darkness and death of this world to the light and the life of the Kingdom of God. It is the procession of the holy passover, from death unto life, from earth unto heaven, from this age to the age to come which will never end.