His Eminence, Archbishop MARK was consecrated to the Holy Episcopacy on December 5, 2004. His consecrating bishops included His Beatitude Ignatius IV at the Patriarchal Cathedral in Damascus, Syria as well as numerous Metropolitans of the Greek Orthodox Patriarchate of Antioch. He was enthroned at St. George Cathedral in Toledo, Ohio on August 25, 2005 and served as Bishop of the Diocese of Toledo and the Midwest of the Antiochian Orthodox Christian Archdiocese of America.

Archbishop MARK served as priest of St. John the Evangelist Church in Beaver Falls, Pennsylvania from 1997 to 2000. In January of 2001, he was assigned to St. George in Grand Rapids, Michigan.

Having been introduced to the Orthodox Church by the V. Rev. George Eber, pastor of St. Antony in Tulsa, Oklahoma and his professors of Church History, Dr. Jerry Sandidge and his Old Testament professor, Dr. Howard Ervin at Oral Roberts University, Archbishop MARK was received into the Church through Holy Chrismation on Great and Holy Wednesday 1989. He attended St. Vladimir’s Orthodox Seminary, receiving his Master of Divinity degree at St. Vladimir’s in 1991.

From 1993 – 1997, His Eminence worked in mental Health as a Mental Health worker at Mercy Psychiatric on a dual diagnosis unit and from 1997 – 2000, as a crisis worker in the emergency room at University of Pittsburgh Medical Center in Aliquippa, PA.

Archbishop MARK was ordained a deacon on August 17, 1997. On September 7, 1997, he was ordained to the Holy Priesthood. Archbishop MARK was received into the Orthodox Church in America on January 1, 2011, and given the title of Bishop of Baltimore. On January 17, 2014, he was nominated to fill the vacant Episcopal See of the Diocese of Philadelphia and Eastern Pennsylvania at a special Diocesan Assembly at Saint Nicholas Church in Bethlehem, PA — he had served as the Diocese’s Administrator since 2012. On March, 18, 2014, he was elected by the members of the Holy Synod of Bishops of the Orthodox Church in America to fill the vacant Episcopal See of Philadelphia and Eastern Pennsylvania.

His Eminence was enthroned as Bishop of Philadelphia and Eastern Pennsylvania, was celebrated at the Hierarchical Divine Liturgy at Saint Stephen Cathedral on Saturday, May 10, 2014. He was elevated to the rank of Archbishop during the 2015 Spring Session of the Holy Synod.

He also presently serves as the Synodal Liason to the various commissions and departments of the OCA.

Be Our Guest!
Discover the rich and ancient beauty of the Orthodox Faith. Learn more about
What to Expect OR View our Service Schedule. 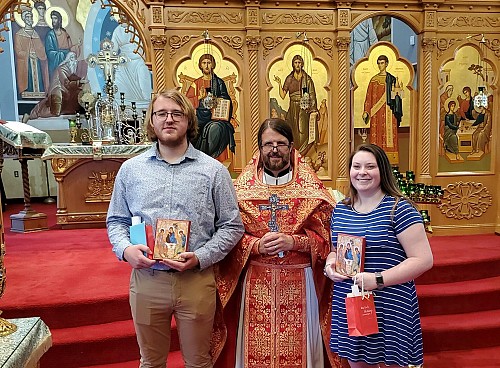 On Sunday June 28, 2020, Fr Innocent of Holy Trinity Orthodox parish of Wilkes-Barre, congratulated Eva Claire King and Vladimir Holoviak, for their academic accomplishments throughout High School and valued contributions to Holy Trinity parish as active participants in Divine Services, Church School, and numerous other projects & programs.  Fr Neal with help from Subdeacon Thomas Donlick, gave each an Icon of the Holy Trinity & other gifts from the parish. DORMITION OF THE THEOTOKOS
5:00 Great Vespers